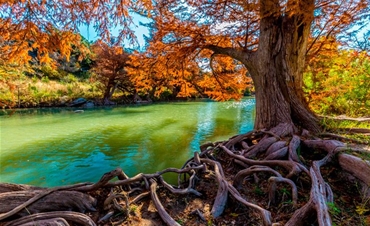 What's important about a tree is not its outward appearance when it's full of leaves and fruits. The roots of a tree are what matters, but they're not seen because they're underground.

At least once a year, during a certain season, this tree will undergo some change, with the loss of leaves and a period where it will not bear fruit. However, because of its strong roots, it will once again be the tree it always was. Not even time can change this. On several occasions during the course of our life, we will be like this tree.

So how do you deal with this situation, which may cause some discomfort? It's simple!

If your roots remain in the river, which is the Holy Spirit, in the "season of the Most High," He will honour you!

Blessed is the man who trusts in the LORD, and whose hope is the LORD. For he shall be like a tree planted by the waters, which spreads out its roots by the river, and will not fear when heat comes; but its leaf  will be green, and will not be anxious in the year of drought, nor will cease from yielding fruit. Jeremiah 17.7-8

When you trust, even during the dry season, you will yield fruit!

Before destruction the heart of a man is haughty, and before honor is humility. Proverbs 18.12

He doesn't come by chance

Why haven't I received the Holy Spirit yet? Well, if you are asking this question, at least you've taken one step towards being baptised: youâve heard of Him and want to receive Him.

It is interesting how negative thoughts can influence people's ability to concentrate on their goals. Such thoughts bring insecurity, fear and instability. That is why we need to fight and reject them by occupying our minds with thoughts of God.