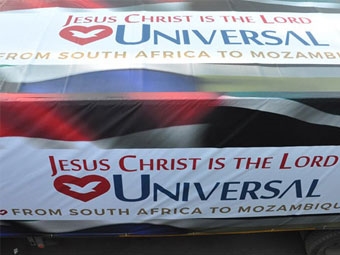 The number of dead is already more than one thousand, with Mozambique being the country most affected. Perhaps it will never be possible to document the exact death toll as many people are still missing. There are also secondary consequences including diseases such as cholera which have risen as a result of contaminated water and food.

Following this devastation, the Mozambican people faced another challenge when Cyclone Kenneth hit the country on 25 April, destroying entire villages with winds of up to 280 km/h and killing more than 40 people. More than 3,000 houses were destroyed and 18,000 people had to seek protection in shelters.

In this image it is possible to see the destruction caused in the village of Pemba after it was hit by the cyclone.

NGOs and governments from various countries mobilised humanitarian aid. The Brazilian government announced last Friday (26 April) that the search and rescue team it had sent to Mozambique will remain in the country, and that it will transfer the team from the central region to the area in the north affected by Cyclone Kenneth, in order to assist with the mission’s search and rescue operations.

An example of love thy neighbour: The Universal Church of the Kingdom of God in South Africa has mobilised aid to help its neighbouring country. Members, assistants, bishops and pastors joined forces in the "SOS Mozambique" campaign.

During the Passover weekend, the Universal Church held three special events on Good Friday, Holy Saturday and Resurrection Sunday. At all these events thousands of people witnessed the arrival of the Ark of the Covenant and had the opportunity to make donations towards the Mozambique relief effort.

The events took place at the Ellis Park Stadium in Johannesburg, the Adcock Stadium in Port Elizabeth, and at the Philippi Stadium in Cape Town.

At all of them, volunteers stood in solidarity with those suffering in Mozambique. 230 tons of non-perishable food, water and clothes were collected. These will be taken by trucks to Mozambique.

The donations will be given to the National Institute of Disaster Management which is the government institution responsible for coordinating the work of Disaster Risk Reduction in Mozambique.

For Bishop Marcelo Pires, responsible for the work of the Universal Church in South Africa, these donations are, above all, opportunities to renew and restore the faith of those who have lost everything during the cyclones.

"When someone endures a disaster situation and loses everything, the greatest loss is of hope, faith and the will to live. The person does not believe that they will ever recover from the situation. However, when you see that someone cares, helps, and is with you, offering support and strength, the person is able to regain their faith”, said Bishop Marcelo.

Faith can also be seen in the action of every volunteer involved. For Bishop Marcelo, these actions are a demonstration of the Biblical command to: love your neighbour.

"And we can go further by saying that this effort is an exercise of faith. Faith without works is dead. The Bible says, 'Show me your faith without your works, and I will show you my faith by my works.' (James 2:18). When we look at people in need we are seeing Jesus", Bishop Marcelo added.

In addition, Bishop Honorilton Gonçalves, responsible for the work of the Universal Church in Mozambique, pointed out that the Mozambican people were already in need of help even before the cyclones.

"Before the two cyclones, the situation was already very precarious and many people were in need of basic necessities. After the cyclones the need increased enormously. So, this help coming from South Africa is extremely welcome and greatly appreciated. I believe that it will help address the needs of a significant part of the affected population", noted Bishop Gonçalves.

Human trafficking on the rise in SA

In May this year the International Organisation for Migration reported an increase in human trafficking in South Africa.

World Diabetes Day highlights the prevalence of diabetes mellitus and creates awareness about this serious condition, known as the silent killer.

Lehlogonolo felt humiliated and worthless when he battled to find a job after he graduated as an electrical engineer.