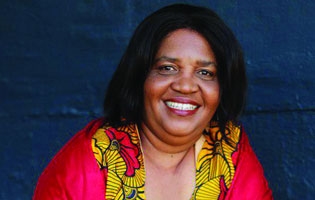 Rising up from the dust

Matshidiso resigned her job as a primary school teacher after 16 years to pursue her entrepreneurial dreams, but things did not work out as she planned.

She used her provident fund and partnered with two people to establish a cleaning company.

"We bought all the cleaning equipment for the business, but we did not make profit because we all lacked business skills.  Life became difficult for me because I had invested all my money in the business. I could not pay my clothing accounts nor afford other things. I depended on my sisters for financial support," said Matshidiso.

The company ended up closing down after two years.

"That was a huge loss which was very painful because there was no way I could recover the money I lost. I continued attending services at the Universal Church and was encouraged to use my faith to change my situation," she said.

That same year Matshidiso took a leap of faith. She took part in the movements of faith in the church and asked God to bless her finances.

"I was determined that God was going to bless my life. I used my faith and applied for a job in another school for a position as a teacher. A month later, I was hired and my finances improved. In 2016, I was able to buy myself a three-bedroomed house. I continued taking part in the movements of faith in the church and God honoured my faith.

This year I managed to buy myself a Mercedes Benz. I am grateful to God for the blessed finances and the strength He gave me to pick up the pieces of my life. I am independent and lack nothing because God is my only provider," said Matshidiso.

Maria grew up in a four-roomed house that accommodated 18 people who were supported by her mother, the only employed family member.

It was only after Eugene took part in the Campaign of Israel that he was able to build the house of his dreams and see his business grow. For nine years, he lived with his family in a cramped house because he could not afford to buy the kind of home he wanted.

One decision opened many gates

Fighting with his mother, drinking alcohol and smoking dagga ended after Siyabonga attended services at the Universal Church and saw a need to rebuild his broken life in 2002.