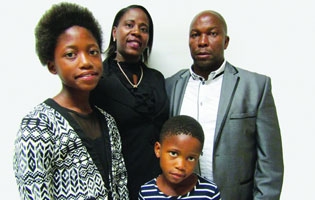 Being unable to conceive for six years after she was married left Sarah feeling humiliated and ashamed. She and her husband were already members of the Universal Church when they married.

"We wanted to have a child soon after we were married, but our hopes faded each year as I could not conceive. I became discouraged and lost hope because I could not bear a child for my    husband. We consulted different doctors but I still could not conceive. My husband always supported me, but I felt incomplete without having a child," she said.

"To my surprise he told me I was three weeks' pregnant. My excitement was however dampened after the doctor said he had found that my womb had an opening that could lead to a miscarriage. I continued attending services and asked God to protect my unborn baby. I then gave birth to a healthy baby girl who is now 14 years old. Five years later I became pregnant again.

My pregnancy had complications and at some point, the doctors advised me to terminate because my blood pressure was too high. Believing in the promises of God, I refused to terminate the pregnancy and I spoke life over my unborn baby. I carried the pregnancy to full term and gave birth to another healthy baby girl," she said.

God not only blessed the fruit of her womb, but her financial life also improved.

"I had a part-time job as a computer facilitator, but after giving birth to my daughters I furthered my studies and graduated with a national diploma in education. I now have a full-time job as a teacher. We have extended our house to 10 rooms. I have a blessed family and we are enjoying the goodness of God," said Sarah.

The Loss Left Me Needy

Losing her mother when she was eight years old made Winile believe that no one would love her the same way her mother did.

A painful chapter of my life

Battling with severe abdominal pain that started after giving birth and the unexplained disappearance of her husband when she needed him the most left Thandi in despair.