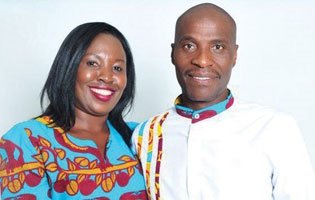 We finally tied the knot

It was after he attended the Therapy of Love service that Stephen understood it was wrong to cohabitate and he started saving money to marry his partner.

"We were already living together when we started attending the services at the Universal Church in 2006. I survived on temporary jobs which did not pay me well. I could not even afford to buy clothes and food for my family.

I never saw our cohabitation as a problem because I thought God knew I did not have money to marry my partner and I already had three children to provide for," he said.

Stephen's financial difficulties affected his love life badly as he often fought with his partner over money issues.

"We sometimes spent days without talking to each other and I would refuse to eat the food she prepared," said Stephen.

In 2016, he attended the Therapy of Love services and he learnt that living together before marriage was wrong. He also understood that he needed to do the right thing in order for God to bless his financial life.

"God honoured my faith and I found a permanent job. We stopped fighting over money issues because I was able to provide for my family's financial needs," said Stephen.

In 2017, Stephen and Promise registered their marriage at Home Affairs and they were later married in the church.

"I am happily married and treat my wife with respect. My children lack nothing because I am able to provide for them. I now approach God with boldness because I obey His word," said Stephen.

I neglected my children

An excessive intake of alcohol made Fihliwe neglect her two children and miss out on a prospective marriage.

A painful chapter of my life

Battling with severe abdominal pain that started after giving birth and the unexplained disappearance of her husband when she needed him the most left Thandi in despair.

Rebuilding her relationship with her mother and accepting her stepfather freed Andiswa from the anger and bitterness she harboured for many years.