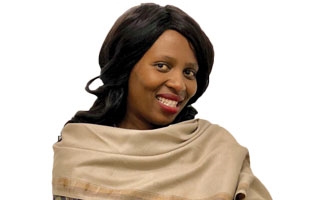 "He took care of me and our son, but he could not control his jealousy. He was insecure and physically abused me. He became angry when I spoke to his male friends and his brothers. He accused me of cheating on him and he would beat me up. Leaving him was the last thing I wanted to do because I did not want to disappoint my family. There was no love in our relationship, but I kept telling my family I was happy and we were planning to get married. His abusive actions left me angry and bitter," said Zanele.

She recalls the day her partner beat her up and dislocated her jaw.

"He offered to drive me to work and he started an argument in the car. He told me that it was better we both die because we had a lot of problems. He then parked the car by the beach and pulled me out. He started beating me up until I could not even run to save my life. I tried to escape but I fell on the ground and he continued beating me up. A passerby recognised me and came to intervene. My whole body was bruised and my jaw was dislocated. I was taken to hospital for treatment," said Zanele.

When she was discharged, Zanele laid charges again her boyfriend and he was arrested for two weeks.

"When he came back, I told him I no longer wanted to be in a relationship with him. He then took all his things and left," she said.

In 2008, she walked past the Universal Church and an assistant invited her to go inside for a prayer.

"I did not hesitate because I wanted inner healing from my traumatic past. I took part in the chains of prayer on Wednesday for my spiritual life. I surrendered my life to God and put into practice the teachings of faith. I also learnt that I was not doing my ex-boyfriend a favour by forgiving him, but it was good for my spiritual development. I then asked God to help. As I continued trusting God, I was able to completely forgive the father of my son. God gave me relief and peace. I found a job as a project manager at a day care centre and I am able to take care of my 16-year-old son. God gave me relief and peace," said Zanele.

I Wanted Him Dead

Overwhelmed by anger, TracyÂ looked for a hitman to kill the father of her two children, whom she suspected ofÂ shooting her boyfriend.

"My life became a living hell after I lost my parents at the age of 12 and had to move in with my aunt. They passed on within months of each other and that was a double tragedy for me and my elder brother.

I disobeyed my parents to please my friends

When Sindiswa was in high school, she disobeyed her parents, did everything to please her friends and went out most nights. She lied to her parents about her whereabouts, drank alcohol, smoked hubbly bubbly and didn't do her homework.