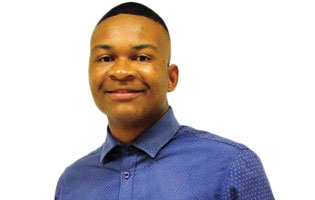 For many years, Bilton found it difficult to forgive his father who left him when he was three years old to be raised by his unemployed mother who struggled to provide for him.

"My father lived and worked in Johannesburg while we were back in our home country. He did not visit or support us financially. We ate from my mother's vegetable garden. I did not have nice clothes like other children. I wore slippers to school and that killed my confidence. I blamed my father for our financial struggle and I hated him," said Bilton.

When he was nine years old, Bilton and his mother moved to Johannesburg to live with his father. However, they suffered physical abuse at the hands of his father.

"My father was addicted to alcohol and when he was drunk he abused us physically. He used to wake us up at night when he was drunk and beat us up. I lived in fear and I blamed myself for everything," said Bilton.

His uncle, who knew their pain, invited Bilton to the Universal Church and he attended Thursday services for God to restore peace in his family.

"I applied the teachings of faith in my life and that helped me to understand that true happiness only comes from God. In the church, I learned that God was able to forgive us for our mistakes and we must do the same for others. I asked Him to give me a forgiving heart and I was able to forgive my father. I became obedient and loved him. After three years in the church, God restored peace at home. We now spend quality time together as a family. My father is loving and he stopped abusing us. We lack nothing because he provides for us. I am now studying for a degree in business management and my father is taking care of us," said Bilton.

Pretty feared night time because she always had nightmares and heard strange voices.

An outcast from the family

"Growing up, my mother and I lived in a family house with my grandparents who physically and emotionally abused us. My mother was working, but she could not buy clothes or food for us because she was forced to give my grandparents her salary.