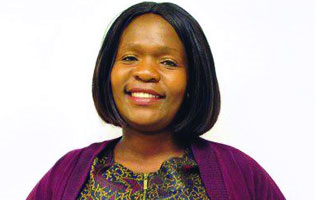 For many years Ntombithini's life was filled with sorrow and fear when she was sexually abused three times in seven years.

"The first time, it was a person I trusted. He was a family friend who took advantage of the trust I had and abused me twice in my own home where I was supposed to be safe. In the second incident he took me to an open field where he sexually abused me. That was the worst experience of my life and I did not want to discuss it with anyone," said Ntombithini.

At the age of 16, Ntombithini was already attending services at the Universal Church when she was again sexually abused, this time by a stranger.

"I was on my way to the church around 6am when a man pointed a gun at me and took me to his house that was not far from the train station. He abused me sexually before he fell asleep. That was when I was able to escape and met a woman who helped me call the police. I was taken to hospital for treatment," said Ntombithini.

That experience tormented her and instilled fear in her for many years.

"I feared walking alone on the street even during the day because I felt somewhere there was a man who was waiting to sexually abuse me. At a service, I shared my pain and experience of fear with an assistant who advised me to attend services on Wednesdays for my spiritual growth and inner healing. I became sincere to God about how I felt and allowed Him to heal my inner wounds. His presence helped me to forgive the men who sexually abused me. Forgiving them gave me inner healing and peace of mind," said Ntombithini

Nosipho did not know her parents until her teen years because she was brought up by a relative.

Lonely after spending all her money

Anger, bitterness and regrets filled Lerato after she misspent a large windfall and soon saw all her friends leaving her. She inherited a large sum of money after her husband passed away. To forget her loss and the loneliness she felt, Lerato spent all the money on new friends she made.

Losing his mother when he was eight years old and living with his aunt who ill-treated him drove Tsonang to live on the streets where he had to sleep with one eye open because of the dangers he was exposed to.