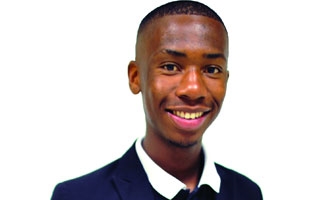 Loss left me in despair

Nhlanhla's father's gruesome death left the 14-year-old boy hopeless and heartbroken. It was difficult for him to wake up every day and to face going to school.

"My father was stabbed to death by intruders who broke into our house at night. He was discovered by my mother who found him lying in a pool of blood.  He was confirmed dead on the scene. That incident shattered my dreams and left me feeling like a part of me had died with him. A year later I plunged into depression.  I lost interest in my studies and all I wanted was to sleep at home for the whole day," said Nhlanhla.

Unable to bear the pain of losing his father, Nhlanhla attempted suicide a year later when he drank a cleaning chemical in the morning which he hoped would kill him.

"The day went by without anything happening to me and I realised I was not going to die any time soon," he said.

In 2018, Nhlanhla was invited to the Universal Church and attended services on Fridays for deliverance from suicidal thoughts.

"I also attended on Wednesdays and asked God to fill me with His presence and heal me from the pain of losing my father. A month later, I was able to speak about my father’s passing without being emotional. I also found the comfort and healing I needed. I stopped entertaining suicidal thoughts after I understood that my father had finished his race and I had mine to run. I now have the presence of God in me and the peace I never had after I lost my father. I am outgoing and doing well in my studies," said Nhlanhla.

Greed drove Vusimuzi, a technician, to turn to crime which landed him in prison.

Being raised by her grandmother, while her mother lived with her other children and her new partner, brewed a strong anger in Ayanda.

A decision that changed my life

Abusing her new-found freedom as a university student, Mbali spent her weekends partying with friends, despite being a member of the Universal Church. After completing matric, she moved to another province to study for a degree in public administration.