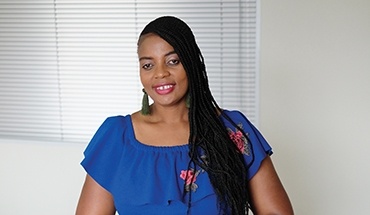 For 10 years Selamiso remained in the same position and earned the same salary while she was made to train new employees in the company.

She applied for internal positions, however she was never considered to be a suitable candidate. “My employers knew I was the best employee as they always put me at the front of the hotel whenever there were important guests coming over.I trained new people who were later promoted to occupy senior positions in the company and earned more than I did. My colleagues gossiped about me and how the company had taken advantage of me.

I contemplated resigning from my job, but I feared living without an income,” she said. One Saturday Selamiso was invited by members of the Universal Church who were evangelising in her neighbourhood. “After the rst service I attended, I was encouraged to use my faith to change my situation.

I later attended Monday services and asked God to bless my nances. After three months in the church, I was promoted for the rst time in 10 years and received a salary increase. That encouraged me to dream big because everything was possible with God.

I resigned before that year ended and I started a network marketing business. I now make ve times more money than I did when I was employed.I’m able to do everything that I couldn’t before. Taking a leap of faith and trusting God enabled me to lead a life I could not lead for 10 years, even though I worked,” said Selamiso.

Hearing my father telling people that he wanted to shoot himself when he learnt that my mother was pregnant with me and noticing how he never took on his fatherly responsibilities confirmed that he did not love me.

My alcohol and dagga consumption put a strain on my financial life. I borrowed money from friends, but I could not pay them back. I avoided going to the same places because I did not have their money. I was always stressed because I could not even provide for my cousins like I used to.