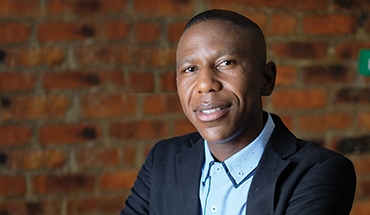 Aged only seven years, Thembelani had to choose between his mother, who battled to provide for ve children, and an absent father who had money but chose not to spend it on his children.

My parents separated when I was two years old and my mother sold everything from sweets to clothing in order to provide for us while my father had a well-paid job. He did not nish building the house and he did not visit us often or send money.

We were the symbol of poverty and we ate mealie-meal pap and boiled spinach every day.

We were the family that was looked down on by our neighbours who also made a pathway through our yard because it was not fenced,” he said. The hardships Thembelani and his family su ered made them grow closer, leading to Thembelani refusing to move in with his father when he was seven years old.

“I overheard him telling a neighbour that he was taking me and my little sister with him. My mother and my three elder siblings were not home that day. I then took my sister and ran to our uncle’s house because I did not want to live with a stranger,” said Thembelani.

At 16, Thembelani and his family were invited by his uncle to attend services at the Universal Church. “At a service, I learnt about forgiveness and that it was the character of God.

I attended services on Wednesdays and asked God to soften my heart to forgive my father for the humiliation and poverty he exposed us to. I started missing him after a month in the church, something I never felt before.

He however passed on a year later and I was able mourn the loss because I was no longer angry with him I now have a well-paid job and I am able to provide the best things in life for my mother who su ered a lot for us.

I finished the house that was left by my father and extended it. I also built a wall so that people don’t cross through our yard. Surrendering my life to God brought me dignity and made me enjoy a blessed life,” he said.

I lived a double life

From the age of 17, Inga lived a double life because she wanted to please both her mother, a committed member of the church, and her friends who drank and smoked.

Learning about her partner's infidelities and his plans to marry another woman left Leah disappointed and heartbroken. She believed that God had shown her some signs that she ignored because she did not want her children to grow up without their father.