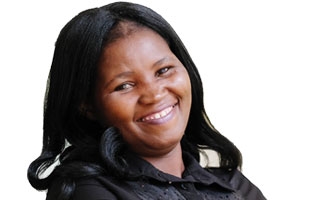 It was after Lina attended a Good Friday event at Ellis Park Stadium that she was able to let go of grudges she had harboured towards her family, for many years.

"I developed grudges after the divorce of my parents and having to grow up in my mother's family that illtreated me. My cousins ate good food with meat while I was given a different meal with no meat. I also did not have a proper school uniform and other necessities.

I eventually dropped out when I was in grade seven because there was no one who was responsible for my school needs and my parents were living with their new families. Feeling neglected by my family, I developed anger and harboured grudges towards them. I became a loner and avoided spending time with the family. I later became a violent person who provoked and fought with everyone. I remember fighting with a group of four women and stabbed one of them badly," said Lina.

In 2010, she started attending services at the Universal Church, but she battled to let go of the grudges she carried against her family.

"I attended the Good Friday event at Ellis Park stadium where bishop preached about how hate and bitterness can destroy one’s life. After a few days I visited the woman I stabbed and asked her to forgive me. I was also able to forgive my family that ill-treated me. The more I prayed for my family, the more I developed love towards them. In 2017, I met Tshikile and we got married a year later in the church. I now have my own family and am filled with the love of God," said Lina.

The 21 days with a difference

Taking part in the 21 Days Fast of Daniel marked a new dawn for Agnes who lived a bitter and unhappy life.

My life was a roller-coaster ride

The early years of Angeline's marriage were not so rosy as she suffered from different illnesses and had to deal with infidelity.